Children start fund for education to help the needy

Ritika’s father was happy and quite relieved that he was able to pay the school fees for his daughter without having to borrow from anybody. Twelve-year-old Ritika, is a student of 6th class in Nazareth Matriculation Higher Secondary School, Tiruvallur district.

Ritika was enrolled into the Pandeshwaram centre of the project in 2016. Her father was a cable operator and mother was an MGNREGA worker. Though her parents wanted her to study in a good school, the school fees were always a concern.

In 2016, the concept of ‘Fund for Education’ was introduced in Pandeswaram Enlight centre. All children were given a piggy bank and encouraged to save their pocket money. During parents meetings, the parents were motivated to support the concept and thus encourage the culture of savings within children. The money saved was to be used for the educational need of children. 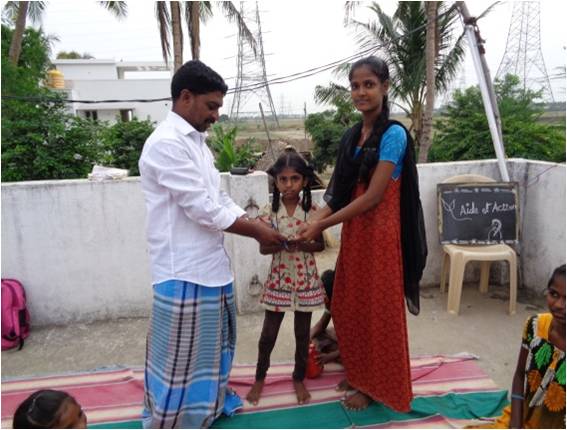 Following the concept of savings, within 8 months Ritika successfully saved Rs.2896/-. This became helpful in paying her school fees.

"I really appreciate this idea, which helped in developing a sense of savings within my daughter and the manner in which this money was useful for her education. I was able to pay her school fees without any worries. I want to continue this savings for my daughter’s future” So says Ritika’s father.