No looking back for Manisha

Eleven year old Manisha, student of class IV was a quiet and shy girl when she joined the New Seemapuri centre, Delhi. Her family of six members had migrated from Bihar, six years seeking better livelihood and resided in a single room rented dwelling. Her father was a painter but the income seasonal and insufficient. Hence to make both ends meet the family packed and sold toys and earned them an average monthly income of just INR6000/-.

Manisha was neither regular to school nor was she able to complete her homework. She was even irregular to the child support centre. When enquired, the team found that she was more often engaged in packing the toys.

When subjected to the competency assessment excercise, she scored poorly (Score ‘D’) in Hindi, English and Arithmetic. This result was shared with her parents and they were counselled. Finally they agreed to co-operate and provide support and conducive environment for Manisha at home to study.  Following this Manisha was put under direct supervision of the centre lead who with support of varied TLMs helped her to learn. The team consistently motivated her parents and they began monitoring the efforts and progress of Manisha. They also ensured that she was regular to the school and to the centre. 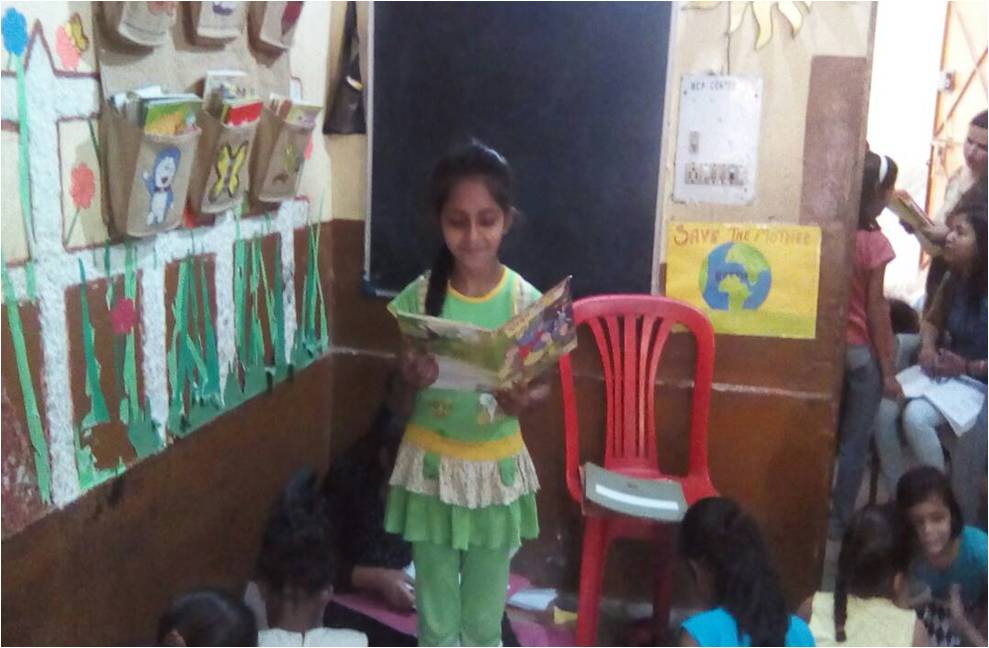 This triggered changes in her daily schedule, she became regular to school and the centre and was able to complete her homework herself. She also participated in the extra-curricular learning activities organised in the centre. Manisha volunteered and began assisting the librarian of ‘Wall O books’.

Today she is able to read small paragraphs in both English and Hindi and show remarkable improvement in Maths. In the first competency assessment exercise she had scored ‘D’ for Reading, Writing and Maths while in the second round of the assessment she had moved from D to A1 and D to B1 in Hindi Reading and Writing respectively, from D to C1 and D to B1 in English Reading and Writing respectively and from D to C1 in Mathematics. She stood second in her class with a score of 85% in her annual exams. Today she is a confident girl and participates actively in various activities. She competed for slogan writing on 22nd April “Earth Day” and won a prize. Her parents were overwhelmed by her progress.

The project witnessed several similar examplary progress by girl children taking their parents by surprise. This has brought joy for their parents and re-kindled hope and aspiration within them. Today they do see their daughter’s education as a burden and want to continue it braving all odds.

"I am really surprised by the marks scored by Manisha who had never shown any interest in studies. I promise to ensure that she continues with her education." Manisha’s mother.