“I liked to play than going to school. Once back from school, I leave my school bag and rush out to play with my friends. This was my regular routine. Neither I was serious about my studies nor my parents ever enquired about it. But, now I like to go to school and to study”, so says S.Harini, the 11year old girl from Pandeshwaram village, Tiruvallur District, Tamil Nadu.

Harini’s father is a coolie and her mother works in the MGNREGA programme. She was included in the project and the initial competency assessment exercise showed her competency levels in Reading Writing and Arithmetic to be very poor. Initially she didn’t show interest despite the support provided and her exam results became poorer. Observing her interest in games, the Education volunteer engaged her in the process called “Ennum Ezuthum – Counting & Writing”. This is a playway method of teaching and learning and it soon caught the interest of Harini. Gradually, she began co-operating and her competency levels began to improve which reflected in her school results. She also began participating in various extra-curricular activities. These activities aimed at personality development and developing leadership qualities within children. 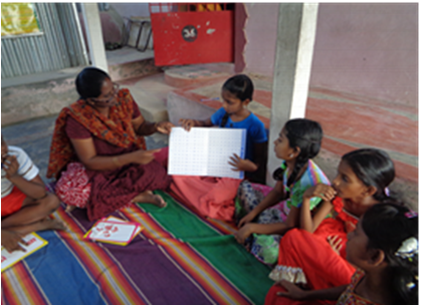 Harini, soon developed a sense of discipline and began following it steadfastly. She soon became the subject of appreciation in her neighbourhood and in her classroom.

“I really liked the way my teacher in the centre helped me to understand the lessons in an easy simple way, I had never thought that learning could be fun,” says Harini.